Everything you know about Apple ad blockers is wrong

The announcement of support for ad blockers in iOS, Apple’s mobile operating system, sent the marketing industry into melt down. If iPhone and iPad users block ads when surfing the web, thousands of campaigns go up in smoke.

This despite the fact that ad blockers have existed on all other platforms for some time now.

Apple claim the move is to speed up mobile web browsing for its users, and to reduce the heavy toll that rich media ads exert on mobile data allowances. The chance to hurt Google’s core business model is just an added bonus.

It’s no secret that iOS users spend much, much more than Android owners, even though there are less of them. Look at these figures for Black Friday 2015 (click for larger versions): 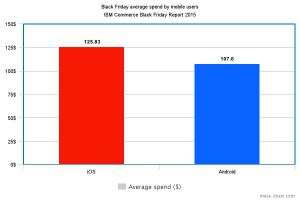 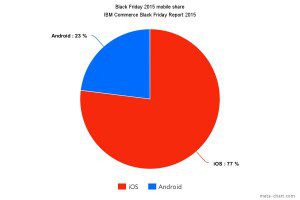 This Apple/Android spend disparity is not a new phenomenon either. iOS users have historically spent more in every sector, so marketers are completely justified in losing their minds about ad blockers right?

Ads are not completely blocked in iOS

The panic is (as usual) the result of ignorance. Ads are not completely blocked on iOS. In fact, there are still ads everywhere.

There are loading screen ads, small banner ads, interstitial ads. If you download a free app, it will be stuffed with ads.

There are even ads in official Apple apps.

Why? Because the much-feared iOS ad blockers only apply to Mobile Safari. If you click a link from the Twitter app, it opens in Twitter’s built-in browser, ads and all.

Consider the two pictures below; on the left is an ad block-enabled Safari screenshot, on the right is the same page opened in the Twitter app:

That’s a pretty damn big ad taking up most of the screen on my ad block-enabled iPhone screen.

Mobile Safari isn’t as important as scaremongers make out

The fact that ads are displayed in in-app browsers is actually really, really important. Because in terms of smartphone use, the browser is fairly unimportant. The majority of a user’s time is spent inside apps, not in Mobile Safari.

Mobile Safari is the option of last resort for when there isn’t “an app for that”.

This observation holds true even though in almost every use category people claim to prefer browsers over apps (click for a larger version): 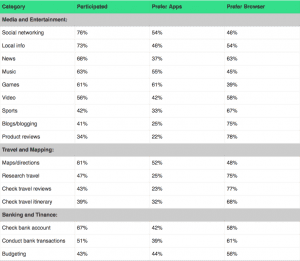 Despite these stated preferences, the reality is that users spend almost all of their smartphone time in apps. So they are unlikely to see your mobile-optimised web ads even if they don’t have ad blockers installed. 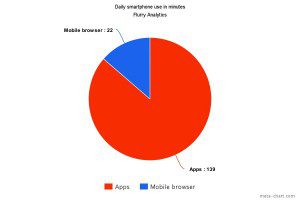 This is how smartphone owners use their device each day – and it ain’t for surfing the web.
Flurry Analytics

Marketers have cursed Apple for daring to implement ad blockers – but they’re missing the point. There was a very good reason ad blockers went straight to the top of the App Store charts when iOS 9 launched:

In fact, people hate online ads so much that they are willing to pay not to see them. They are fed up of being stalked, profiled and analysed under the pretence of serving ads tailored to their interests.

But it gets even worse.

People with the highest incomes are also most likely to have ad blockers installed.

Let that sink in for a minute. High income segments that attract the highest advertising rates are also the least likely to see your ads.

If marketers insist on doing what they’ve always done, there are plenty of other places to show ads – even on Apple devices with ad blockers installed. From iAd banners inside apps, to promoted posts/tweets within the social platforms that consume so much of your customers’ attention, there’s always a place to shove another ad on the mighty iPhone.

But is this really the best way to spend your marketing budget?

The age of the banner is nearing its end. The time has come for marketers to start showing some creativity  – even if that means dropping online  profiling in favour of ads with mass appeal.

Give your customers what they actually want

Successful business rule #1 – give your customers what they actually want.

Successful business rule #2 – don’t try and give customers what they don’t want.

Social media marketing offers some potential, with promoted tweets and posts becoming an unavoidable fact of life for socially-enabled consumers. The trade-off between functionality and advertising is seen to be acceptable, even if it does involve a high degree of profiling.

Customers now expect to do most of the pre-purchase process themselves. Two-thirds of the ‘active-evaluation’ phase of buying is conducted without contacting brands directly.

Your buyers want to make their own informed decisions without your assistance. Which is where inbound marketing can help.

By producing content that allows them to answer their own questions, marketers can help customers move along the sales funnel. The difference is that the buyer remains in complete control of the process.

Great content gives buyers the answers they need, helps to raise brand awareness, and generates solid leads for when they are ready to move into the final stages of a sale.

None of which can be accomplished with a banner ad anyway.

So who did kill the banner ad?

And no-one (apart from Google) will be mourning their demise.

Ready for the future? Drop me a line and we’ll talk content.