What does the Apple Watch mean for marketers?

After a massive fight with UPS over a lost shipment, I’ve been wearing an Apple Watch for several weeks now. All of the comments you’ve read elsewhere are true – on the plus side it’s surprisingly light, beautifully manufactured, and slick. And many of the negatives are (in my experience) complete FUD – apps don’t take forever to load (when your phone is connected to WiFi anyway), nor is the display on screen any more compromised than should be expected for something so tiny.

But there are problems. You’re going to need two Watches for a start, otherwise all of the cool haptic messaging features are wasted – so you know all those people bitching about the high cost of the watch? Well they’re wrong. By at least 50%. 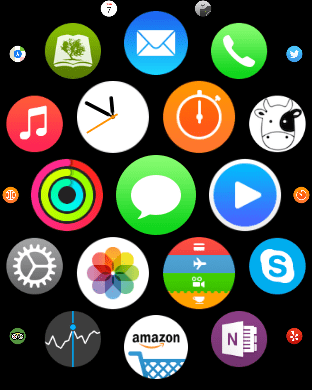 The Apple Watch Messages app is (arguably) where marketers need to be focusing their attention.

There’s also a problem with some of the early third-party apps being pretty poor. But this is the price I pay for being an early adopter – facing down the rush to be first. It’s a bit like the Wild West where everyone is trying to stake their claim – unfortunately only a few will strike gold in the long term. The ideas are there, they just need refinement in most cases. And it’s unfair to level the blame for these shortcomings at Apple.

But perhaps the biggest problem is one of social norms. In the same way no one liked the idea of being filmed by some geek wearing Google Glass, it’s also considered extremely rude to check one’s watch as you are being talked to. I realised this when an alert came through to my wrist – I glanced down to see what required my attention and the person I was speaking to immediately took offence, assuming I was making the universally recognised “you’re-boring-me-now-so-please-get-a-move-on” gesture.

Whether the Apple Watch succeeds or not, the platform offers some very important lessons for marketers about the future of messaging.

Apple Watch and marketers – this is important

Once marketers realised the Apple App Store wasn’t just a fad, businesses fell over themselves to build their own branded app. Unfortunately most of those same marketers didn’t seem to care that those apps did nothing more than fire up the company website. Which meant they had to shell out for a whole new development as it became apparent that iPhone owners wouldn’t put up with their lazy crap.

And so many businesses appear to making the same mistake with Apple Watch apps – they don’t really have to do much more than exist. A tick in the “wearables” box for the annual digital credibility survey that helps to massage the egos of brands desperate to prove their “relevance”.

But the true value of the Watch, as far as marketers are concerned anyway, has nothing at all to do with apps. It is the immediacy of the messaging. Every alert arriving on the wearer’s handset can be read and responded to with a quick flick of the wrist, saving the hassle of digging around in your pocket to find your iPhone.

The reality is that Apple Watch wearers are much more likely to read timely, relevant messages.

The relentless focus on smartphone apps all but killed SMS marketing. Why limit yourself to 140 characters of plain text when you can blast all-singing all-dancing multimedia messages at your prospects via a branded app?

But the dirty secret branded app fans like to hide is that 20% of apps are only ever opened once. And many more are only opened periodically to get rid of the annoying notification count, not because consumers feel a burning need to read your message. Assuming they didn’t turn off notifications when they installed your app in the first place. 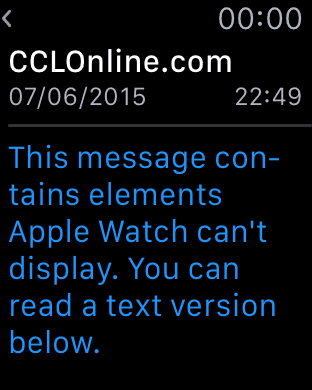 This is what a marketing email looks like on an Apple Watch. Compelling. Not.

More importantly still, all of the tips you will see online about maximising the Watch’s battery life (or to limit annoying alerts popping up all the time) include one about turning off notifications for non-essential apps. So if the notifications are disabled for your iPhone app, you can be fairly sure that users will also disable it on their wrist – assuming they install your Watch app at all.

But the one notification platform that iPhone users will never turn off is SMS – it is an ingrained aspect of modern communications for millennials, Gen Xers and even Baby Boomers. And this observation is incredibly important because it means that:

It is also important to note that although email can be read on the watch, all your pretty images and formatting is stripped. Worse still, the tiny screen is not designed to be used for mailbox management or extended reading. Which means that Watch wearers are much more likely to delete anything they are not immediately interested in – particularly anything that looks like generic marketing spam.

And when it’s deleted on the Watch, it’s deleted from the mailbox. There’s no second chance when they go back to their phone – it’s gone for good.

But like all messaging, avoid the temptation to abuse it. PPI reclaim scams and mobile upgrade deals have tarnished the image of SMS marketing, so make sure your messages are truly compelling before you ruin it for everyone else.

The Apple Watch presents a new spin on an old discipline for copywriters. We’re all well used to trying to condense the brand identity, tone of voice, marketing message and call to action into as few words as possible. And in the age of Twitter we’ve become quite good at it too.

But the Apple Watch (and the inevitable raft of imitators that follow) is going to demand that copywriters produce even more micro-format text to improve messaging and reach our audiences on their wrists. As always, it’s a case of doing more with less.

It’s not sexy, but the humble SMS could be the chosen push notification of the near future for marketers who want to gain a competitive advantage when reaching their prospects any place, any time.

4 comments to What does the Apple Watch mean for marketers?