Talk of Google Glass is everywhere in the media at the moment, with many branding the technology as the breakthrough for mainstream wearable computing. If you have been living under a rock for the past few weeks, you will have missed the release of the device to a select band of early adopters. Looking a bit like a pair of glasses, the device gives wearers a display mounted over their right eye onto which is projected information like emails, notifications and tweets. They can also take photos and videos using a camera built into the headset.

The technology remains in its infancy which is why Google have limited the number of “explorers”, and why initial reports from all but a few remain relatively muted. Privacy issues aside, the Google Glass project raises two points for marketers to consider.

1. Explorers all agree the technology has potential

Although few people believe the current incarnation of Google Glass has much long-term potential, all firmly agree that wearable computing has a future. The ability to receive data relevant to current context is the killer feature of Google Glass. 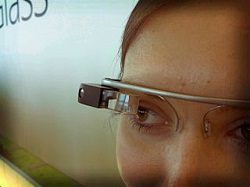 How will your mobile marketing messages have to change to fit this tiny interface?

Marketers have long known that context is essential to successful brand messaging, and that location-aware systems will be the next evolution in mobile marketing. Although the technology already exists in most smartphones, wearable computing creates new issues which need to be addressed. From smaller screen size, to limited graphic output, to safety concerns, advertising to a Google Glass wearer will take a very different approach to an iPhone user.

2. Messaging is already too intrusive

To further emphasise this point, several Glass users have already reported issues with information overload. Photos, videos, emails and notifications are all flashed up on the display and then dumped into the ‘timeline’. Users complaint that this quickly leads to information overload.

Well known “tech personality” Loic Le Meur voiced his concerns about the intrusive nature of Twitter on Google Glass for instance (ironically using a tweet to do so),

“Anyone knows how to filter the notifications from new Tweets in Google Glass Twitter app? My Glass is getting notified every 10 seconds!!!”

If Le Meur encounters these issues from a simple, 140-character message, how much more difficult does the marketer’s job become?

Time to get thinking, planning and testing

Google Glass is just the first in a line of predicted wearable computing technologies, soon to be joined by the rumoured Apple iWatch. Regardless of which becomes the dominant force in wearable computing, the fact remains that smaller, context-aware devices are going to become mainstream within the next 12 to 18 months.

As with any new technology, marketers need to adopt early if they are to gain a strategic advantage over their rivals. The key to success will be pinpoint accurate personalisation to ensure that messages delivered to customers are not only relevant, but override any complaints of intrusiveness and are completely within context.