The day I insulted a pop star and irked some copywriters

Much to my surprise, the article gained a lot of traction – particularly after someone grassed me up to lead singer Ricky Wilson: 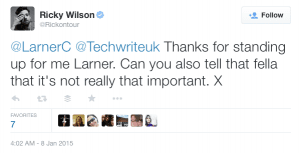 I did however learn three lessons from the “success” of the post.

1. Some copywriters are very limited in their sources of inspiration

A number of fellow professionals were quick to point out that comparing song lyrics to copy is like juxtaposing potatoes and peas. Fair enough.

But it also became apparent that many of these people do not seek to improve their own skills by observing “good” and “bad” wherever it may be found. The implication being that a good copy can only be learned by reading good copy, and thus inspiration must be sought only from the pens of Gary Halbert, Drayton Bird, David Ogilvy et al.

I have a one-word response to this – balls.

I firmly believe that it is only by exposing ourselves to a wide range of mediums and sources that we expand and improve our skills as copywriters.

But this observation may help to explain why so much copy looks exactly the same these days.

Despite a massive uptick in site traffic, the number of leads generated last week was fairly static. This is not to say that the Calls to Action on my site are particularly weak, but that those paying a visit were not part of my target audience.

By commenting on the the original article Ricky Wilson did two things:

Had I been a vendor of Kaiser Chief-related products, this exposure would have been priceless. Instead the Tech Write website was bombarded by Kaiser Chief fans trying to uncover what had irked Ricky.

Thus despite being “popular”, the article failed because it attracted the wrong audience. As my whippet-loving copywriting colleague Andy Maslen says, “you can’t pay followers or retweets into the bank”.

Have you ever “insulted” someone in the public eye? What did you learn from the experience?