So you know your business has competitors offering products and services similar to yours, but have decided outright denial is not the best approach for your own copywriting efforts. How about Assassination then? 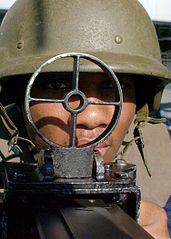 Assassination-style copywriting – Is your competitor in the crosshairs?

Perhaps one of the most direct and aggressive copywriting techniques, Assassination attempts to destroy the reputation of competitors and their products. Typically this would involve writing articles designed to highlight product defects (real or perceived) and attempt to instill fear in the reader that purchasing a rival product will negatively impact their life or business. The following observations tend to hold true when it comes to this form of marketing content:

After all, the aim is to perform a character assassination of the competitor.

The dangers of assassination in copywriting

Choosing to run your competition down publicly is not only behaviour of which your mother wouldn’t approve, but is also quite risky. Samsung adopted the assassination approach to marketing with their recent advert criticising Apple fans. Although Samsung customers were highly amused by the stunt, the Korean smartphone manufacturer also immediately damaged its reputation with many millions of Apple users who are now extremely unlikely to choose Samsung should they switch platforms in future.

The major dangers of assassination-style copywriting and marketing are:

Assassination-style copywriting is a particularly high risk strategy which can backfire spectacularly if used incorrectly. As such this form of web content is best used for finely targeted groups of existing customers, rather than for general consumption.

Need help with your own company copywriting efforts? Why not give us a call?