iOS vs Android is simply the 21st Century equivalent of Betamax vs VHS, Ford vs Holden or West Ham vs Millwall.

Ultimately the average tech user probably doesn’t care about fanboy arguments. They choose what they need at the price they can afford.

Apple vs Android – all PR is good PR?

The second most noticeable aspect of any Apple announcement (after the shiny product launch) is the amount of vitriol it creates. A quick check of the comment threads on Apple fan sites like Mac User shows just how much Android users hate iOS. But comment threads have always been a magnet for those who maintain extreme views (we’re looking at you Daily Mail readers/commenters).

Invariably this hatred spills over into other articles hosted by reputable sites, or opinion pieces for blogs. In times past, having people criticise your products publicly was considered brand suicide. Companies would hire PR ‘gurus’ to spin their way out of negative press.

In fact apologies and corrections by Apple are as rare as rainbow unicorn dung.

What so few of the iOS haters realise is that every article, every tweet and every polemic simply spreads the Apple brand message further. In arguing against Apple, these writers simply draw more attention to the latest product and its features. Better still, they can reach an audience who are not usually interested in Apple products anyway.

They effectively become part of the Apple marketing machine. And an unpaid one at that.

Encouraging people to hate your brand is an incredibly risky strategy. It is also unlikely that Apple set out to deliberately build a community opposed to their products. They did however set out to create a loyal fan base who could wear their “difference” as a badge of honour. 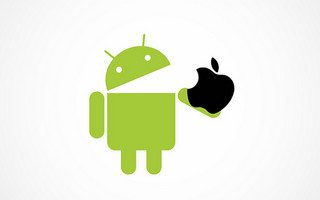 Considering Apple is ‘the choice of creative professionals’, it seems strange that most of the “comedy” artwork is made by Android fans.

Even in the days of the legendary ‘Think Different‘ campaign, Apple’s marketing team were already building a divide between those who used their products and those who did not. People love to belong to exclusive clubs, and Apple created exactly that niche within the previously staid and boring computing sector. Suddenly computers could be sexy.

Over time this divide became almost tribal, helped in part by some inflammatory remarks by the late Steve Jobs. Apple takes the Maslow concept of ‘belonging‘ to the extreme.

Building the level of hatred required to have people unleash their creativity for every announcement is a long game. A very, very long game. The Think Different campaign first aired in 1997, but the first efforts at creating an ‘us and them’ culture could be traced back to the 1984 airing of the ‘Big Brother‘ campaign during the Superbowl.

Apple has actually spent 30 years creating a loyally devoted fan base and a legion of haters.

Brand advocates and haters – what do they mean for you?

If your business has a product that can potentially divide opinion, there may be mileage in a similar tactic. But as the Apple example shows, this is not a strategy that can be built overnight. Cultivating a community of brand advocates takes time. And establishing an army of frothing haters is a similarly drawn-out process.

So ask yourself – do you have plenty of time and the stomach for acres of bad press in certain sectors?

4 comments to Haters – Are they as important as brand advocates?